Used to be a big commercial hub from the XVI century with traders from the East to the West, Hoi An is the land of rich history and diverse cultural values. Therefore, just wandering around the quaint cobblestone streets or visiting rustic busy coffee shops seems to be just a flashback of the long story about Hoi An. Perhaps that’s how Hoi An Memories Show, real-world performance with two records,  is created. More than just an amazing spectacle, this is a precious opportunity to travel back in time and see the scape of Hoi An from the past to the present.

An Overview Of Hoi An Memories

Hoi An Memories Show is organized in Hoi An Impression Theme Park, a separate entertainment center on a tiny islet on Thu Bon River. The very first show was performed at the beginning of 2018 and the version you see now has been modified more or less to bring the ultimate experience to the audience.

Since the original spectacle, Hoi An Memories have received two Vietnamese records. One for the largest outdoor stage. The other is the record for the highest number of artists involved. Demonstrated on an area of about 25,000 meters square with the participation of more than 500 people, no wonder this is the first Vietnamese show featured on Times Square, New York.

All the grandeur in the exterior is the fundamental element to lighten the rhythmic movement of the performers, the close ties among different stages, and especially the hidden meaning behind each scene. The show is an irresistible invitation to explore Hoi An in a one-of-a-kind aspect with a unique approach. What To Expect In Hoi An Memories Show

The show is comprised of 5 stages, which showcase the history of Hoi An from the dawn of civilization. Now, I will give you a brief introduction so that you can have a big picture of Hoi An Memories in your mind. No spoiling, I promise.

The epic performance starts with The Life, a vivid picture of the daily activities of Hoi An people at the beginning. As a town widely known for traditional ways of making fabric, the opening scene is a girl sitting by a weaving looms. All the lights focus on the flexible hands and her gentle smile on her lips. After that, you will be overwhelmed with a dazzling strip of more than 100 actresses dressed on Ao Dai, a significant artwork from Hoi An silk.

If weaving is a typical work of women, the men are described in fishing activities and building up large houses. Though these are all laborious jobs, you will only see happiness and thankfulness in their face. For ordinary people in Hoi An, labor is a blessing. From the satisfactory result of diligence, The Life leads us to The Wedding, a remarkable event to highlight the connection of two people and the formation of a family.

The distinctive feature of Hoi An wedding is the Champa traditions. Champa period was the start of a prosperous age in Hoi An with incredible development in all aspects, economy, politics, and culture.

The Champa wedding is between a noble princess, Huyen Tran princess and the King of the ruling dynasty. Every element in the anniversary is attractive and impressive, reflecting a forward step in the spiritual life. Stage 3: The Ocean And The Boat

The Vietnamese often use the image of the ocean and the boat to symbolize the couple relation. The woman is like the sea, sometimes very calm, very peaceful, but she can also get tough and dramatic. The man will be the boat, always on the move.

This stage, hence, concentrates on the love story of a Faifo girl waiting for her sweetheart, the sailor, to come back home. It also presents the booming of Hoi An port as a trading site for merchants from Japan, China, France and so on.

Due to the increasing popularity in the XVI to XVII century, the architecture and the cuisine of Hoi An is a great fusion of both eastern and western culinary techniques. Everything will be truly depicted on the stage The Ocean And The Boat.

Using dance as the main language, the performance will allure you to a world full of emotions with lovely instrumental music. The Port draws the hustle and bustle of one of the busiest international port in Southeast Asia during the XIX century. The main set is a thriving market with numerous attendants. Some are bargaining, some are window-shopping, some are doing tricks.

Though the number of characters is large, each individual appears with a special personality, representing for a social class in Hoi An society of the previous days. There are bad guys alongside with good people. But after all, it’s about the golden memories of Hoi An in the time of chaos. To complete the legendary show, the author makes a perfect combination between the Vietnamese traditional customs and the modern contemporary dance.

Hoi An is among a few cities that well preserve almost all the time-honored values ​​of hundreds of years ago despite experiencing many ups and downs in history. Ao Dai performance, in which many girls are riding bicycles along the light road, crept through every corner of the old town at the end of Hoi An Memories, once again states that all the long-established traditions are êtrnal in the modern and active Hoi An. Because the seat is limited, it is advisable to book the ticket in advance. Remember to resolve to trustworthy agencies to avoid being ripped off.

The location of Hoi An Impression Theme Park is pretty confusing due to the fact that it is on an exclusive islet. You will want to get there earlier than the starting time because every minute of the show is precious.

As a common rule, no kind of filming will be allowed. Don’t forget to turn off your cell phones, tablets or cameras so that you can completely emerge in the show.

There are food stands inside the Theme Park but the price will be expensive, so the best recommendation is to have dinner before watching the performance and bring your own beverage. Combined Activities To Explore Hoi An

Hoi An Memories Show happens in the evening, so you have all the day to discover the beauty of this ancient town. There is no better way to dip in every corner of Hoi An than a walking tour with a local guide. He or she will let you know the best-kept secrets in the town like the best cafe, the most stunning view.

When the sun totally sets, Hoi An will be dressed up with thousands of colorful lanterns on the streets and by the river. If you have some time before the show begins, get close to Thu Bon river, you will find several vendors for floating lanterns.

Rumor has it that if you write your wishes and put it on a floating lantern, let the river take it away, your wishes will come true. Though it’s just a myth, it’s worth to try.

– How to spend time in Hoi An

– Top 5 food to make your mouth water in Hoi An.

Our suggested Hoi An packages: 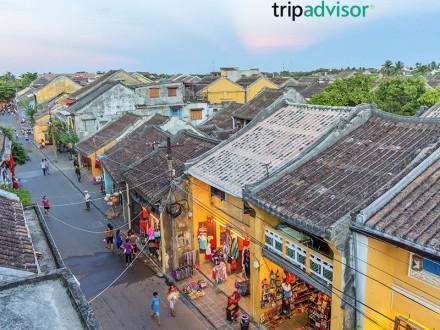