Why I fall for sand dunes of Mui Ne

In most of the brochures the famous sand dunes of Mui Ne are advertised. For me those were the main reason why I chose to go to the city despite its touristy image.

There are the famous white dunes (which are pale-yellow) and the red dunes (which are more orange…). I asked myself if it might be an overrated place to go and discovered it on my own. First: Yes, it is possible. Second: Don’t await too much help if you go alone. But third: It’s still an adventure if the right information is provided which is my job I guess…. 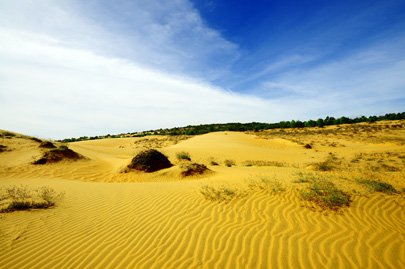 Concerning the white dunes: Even though I wrote before they appeared more pale-yellow to me it’s much a question of the right perspective. Most tourists are coming in the very early morning when the sunlight touches the sand in a pretty white color. It might be a crowded place at sunset and I won’t say it’s worth to get up early to see the sunset there. The way to the dunes – which is just always along the highway and at the pagoda left (about 20km) – has a much better atmosphere. On the left side several dunes and steppes, getting the first shapes of the day from the early sun… on the right side an endless, lonely beach and the wide, open sea where the fishermen are on their boats already. The area, spotted with hills, forests and dunes might be interesting to visit as well.

The white dunes look despite everything quite amazing from the distance. They are surrounded by the “Lotus Lake” (which has only a few lotus…) and some out-priced quad-bike dealer.

The “red” sand dunes are on the way to the white ones and it’s impossible to miss them. Some children and vendors are standing there already, trying to foist you a sleigh upon. It might be the best time to visit the “red” ones during noon or late afternoon when they get their expected colour. It is worth to stay a while and wander around, during noon only very few tourists are around. I guess due to the desert and no protection from the hot, Vietnamese sun.

Those sleighs depend very much on physics. If you are too heavy it might not work properly and some additional helps are needed. Like watered or otherwise prepared sand.

But are there really red dunes? I’d clearly say “yes”, and they won’t appear on your map. Between the two parts of Mui Ne is something like an almost uninhabited gap. In this area you are able to find red dunes. Right now there are some constructions going on and there’s a small (maybe not yet open) street through the area. This area is much smaller than the other two. Behind it is a cemetery which might be seen from the highway above as well.

Much closer to Mui Ne is the “Fairy Spring”. Located in “tourist” Mui Ne at Huynh Thuc Khang 63, following a small stream. I (and as I’ve seen Wikitravel as well) recommend to go there on your own. Some children might want to play tour guide but that’s not necessary. They’ll only walk along the stream, show you how a banana looks like and that a thornbush is “very dangerous” (I had about 200 of them in my arm as I went through the jungle; they are only nasty, but not dangerous at all).

The waterfall of Fairy Spring is only interesting if you haven’t seen a waterfall before. Around the waterfall mimosas are blooming. I guess most people haven’t seen them before – such as me – and I really enjoyed to touch them.

There are two ways to enter the fairy spring. The regular one during a small canyon, which goes along palms and water-formed sand pillars in red, orange and white. And the second one which is just about 100m long and starts at the highway. (Impossible to oversee it – children and teenager are waiting for paying customers).

As you plan to go in those areas it might be a good idea to carry some glass-bottles or other kinds of transport-equipment with you. There are not much places on earth where you can find so many different kinds of sands such as here. Put together it might be a unique souvenir or present.

All those ways can be accessed by a borrowed motorcycle. But public transport is very well developed and I bet there are buses to those places as well. It might take a bit talent of organization to find them.

I’d say the “border” of the accessible area by motorcycle is the mount Ta Zon. It can be seen from Phan Thiet and from the highway above Mui Ne. There’s a huge antenna on its top, which means there’s a way as well.

The way to the peak is in a quite poor condition. Not many tourists or locals do a trekking tour there. There is almost none of a shady place doesn’t make it much easier to get up during the hot parts of the day. The area of the antenna is inhabited by a friendly Vietnamese and his dogs. The panorama is remarkable and might be the highest pinnacle in the whole closer area.

To get to there you can either drive from Phan Thiet the long circle to Mui Ne or taking one of the junctions at the highway to Sa Ra (there won’t be a sign unfortunately). The roads go through steppes, small villages and sands. Even though, the tourist capital is just a few kilometers away the children here are still not used to foreigners and very friendly.

In a circle around 40km into the direction of HCMC are some other, much higher mountains located. Also a very famous one: Ta Cu, where Vietnam’s biggest Buddha is sleeping. I went the trip by motorcycle and cannot recommend it. The street is long and for most of the Westerners (such as me) the frenetic and too loud honking of Vietnamese truckers, bus drivers and other motorcyclists is nothing but annoying. Also the calculation: Borrowed Bike + Gasoline or ticket shows clearly it might be better to catch a public bus. As I heard it’s number 46.

The entrance fee for Ta Cu mountain is about VND15,000. If we were in colder parts of the world I’d strongly recommend to walk – but we aren’t. So the way through the forest is long, hot and humid and you’ll ask yourself several times what you are fighting for, trekking the long way up. It is not so uncomfortable to walk it back. I’d do it also due to the reason there are monkeys in the trees and you might see some.

The sleeping Buddha is impressive and in any case worth to visit if you got time for that. And the panorama on the peak is worth to see. I didn’t expect it so high and was very delighted.

In this area are other pagodas as well than just the new one on Ta Cu mountain (which is currently in construction and unfortunately mainly poured out of cement which didn’t impress me that much. As long as you aren’t in a hurry most of the monks are pleased to show you around and serve some tea. Maybe you have a lucky day and meet monks who have good English. There are a lot of stories to tell and even more fascinating places to be.