Cambodia is among the countries where people have the strongest and most absolute faith in religion in the world. Since the dawn of the nation, the holy spirit has been a crucial part of daily life. Nowadays, the imprint of traditional cults and creeds is apparent in both the lifestyle and the architecture of the Cambodian. Exploring the country religion, you will step into a whole new world full of myths and legends. An Overview Of Cambodian Religion

In general, Buddhism is the official religion of Cambodia. About 97% of the Cambodian population can be considered as Buddhist followers. Most of them are Theravada Buddhist. Other popular religions include Islam (2.1%), Christianity (1.3%), and ethnic religions (0.3%).

Buddhism plays such an essential part that Dhamma teachings in monasteries with Sangha (monks) are developed in most of the temples in Cambodia. With the history progress, the original beliefs of Theravada Buddhism did integrate with the local rituals to create an indigenous culture of the Cambodian.

Buddhism has been existing in Cambodia since the 5th century AD at least. Some documents even suggest that it had dominated the country from the 3rd century BC. With more than 95% of the citizens following Theravada Buddhism, the most ancient and strict Buddhist school around the world, Cambodia is among the greatest capital of this religion. The national government authorized Theravada Buddhism as its national and official religion in the late 13th century. Since then, it has become one of the Cambodian cultural identity.

Theravada Buddhism appears in not only cultural and spiritual events but it is also recognized in the national laws under Article 43 of the Cambodian Constitution. In the Cambodia’s national slogan: “Nation, Religion, His Majesty”, we can see that Buddhism is really important for the Khmer community. The spiritual life has been deeply etched into the belief and become a typical part of the Khmer.

Cambodian Buddhism suffered greatly during the Khmer Rouge period from 1975 to 1979. Religions were prohibited, temples and religious monuments were damaged or destroyed. An estimated number of 50,000 monks were murdered during that dark time.

Today, Buddhism is still an influential force in Cambodia religion and in everyday life. It has been doing a good job in rebuilding after the loss of many leaders and preachers during the Khmer Rouge period.

Cambodia was first influenced by Hinduism during the early days of the Funan Kingdom (50/68 AD–550 AD). It is one of the official religions of the Khmer Empire. During the most glorious time of the Khmer Dynasties, King Suryavarman II (1113 AD – 1150 AD) had built the current largest Hindu temple, Angkor Wat. The construction of Angkor Wat was initially prepared for the King Mausoleum. The walls of Angkor Wat depicts the Hindi cosmology with bas-reliefs as Suryavarman II was influenced by Vaishnavism, dedicating to Vishnu rather than Shiva god.

Unfortunately, under the reign of Jayavarman VII (1181 AD – 1215 AD), the dominance of Mahayana Buddhism replaced the position of Hinduism in Cambodia. Angkor Wat turned into a Buddhist shrine. The Hindu followers in Cambodia is now a minor community. Still, you can still notice a lot of Hindi imprints on the architectural styles.

Khmer Islam is the religion of the majority of the Cham people (also known as the Khmer Muslim) and a small number of Malays residing in Cambodia. Every Muslim community has a hakem – a leader of a community and a temple, an imam – a prayer and a bible – who calls faithful people to daily prayers. Traditional Cham people still retain many traditions and rituals of Islam. They consider Allah almighty, but they also respect other non-Islamic practices. They share many similar points with the Cham people in the coastal areas of Vietnam.

The first known Christian missionary work in Cambodia was performed by Gaspar da Cruz, a Portuguese member of the Dominica in 1555-1556. Although Cambodia became a French colony in the 19th century, Christianity had little influence on that country. One percent of the Cambodian population is identified as Christians, of which Roman Catholics form the largest group, followed by the Protestant community.

As a strong magnet for thousands of visitors every year, Angkor Wat is the most sacred and mysterious tourist destination in Cambodia. This is the largest religious temple in the world, built in the early 12th century by King Suryavarman II. The temple has a rectangular structure surrounded by a moat, five main gates and the tall towers in the center. In particular, all details at Angkor Wat are carved, sculpted with patterns of religious stories, the goddess Aprasa, a war story,… Located in Angkor Thom complex, Bayon temple was built exclusively for the worship of Mahayana Buddhism. Constructed in the 12th century, Bayon Temple has 54 towers of all shapes and sizes. It is considered the most impressive temple in the Angkor temple complex.

As a temple built in King Jayavarman VII regime to pay tribute his mother, Ta Prohm has an iconic design, very distinctive from other religious buildings in Cambodia. After its completion, the temple was abandoned and surrounded by tropical forests. At the same time, experiencing many ups and downs of history, the temple could not retain its original shape. Instead, the giant tree roots cover, crawling through the stone walls to create strange shapes and attract flocks of visitors to witness  mysterious combination between a manmade structure and the hands of Mother Nature.

Angkor Thom is the last and longest-standing capital of the Khmer empire built by King Jayavarman VII in the late 12th century. This temple complex covers an area of more than 9 km 2 with 5 different entrances. Each entrance has different guarding statue with unique architectural styles.

Phnom Bakheng is a famous and sacred temple of Cambodia. The temple is associated with the legendary story “Twelve Angkorian girls” with the square tomb lying deep underground. Built by King Jayavarman I before the time of Angkor Wat, Phnom Bakheng Temple is no longer in its original state, but the ruins and spectacular location also attract a lot of visitors. In particular, from Phnom Bakheng temple, visitors can watch the romantic sunset on Angkor Wat complex or in the Tonle Sap lake area.

– 6 Traditional Festivals That Reveal The Cultural Life Of The Cambodian

– How To Get A Perfect Angkor Trip?

I didn’t have many opportunities for travel during my early childhood, so I decide to dedicate my young adult years to exploring the world. “Set off with a pure heart”. That’s my motto for any adventure in my life. And as sharing is caring, I love writing about my journeys so that the audience can gain an objective view of the destination. That’s what I do before travelling, set the right, open mind to welcome both obstacles and blessings. So stay tuned for my new stories.

Travel With Us To Discover Cambodia Culture: 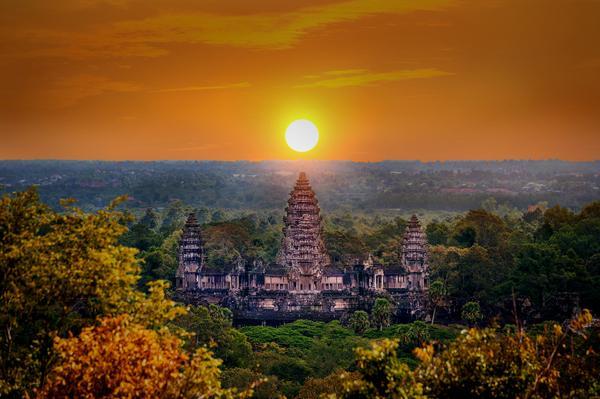 It’s not an overstatement that this package gives you a complete grasp of the South East Asia spirit within just 1 trip. The spectacular nature that will definitely make you hold your breath comes from Ha Long Bay – One of 7 Natural Wonders of the World while the cultural value is highlighted in Angkor Wat (Siem Reap). With various local activities like farming, float shopping, traditional cooking,… you will have enough diverse experience to gain a true insight into the 2 countries. If you are seeking for a closer look into the mysterious and charming land of Indochina, this is the package born for you. It covers a variety of must-visit destinations in the area, from breathtaking nature land like Ha Long Bay to culture-rich one like Siem Reap or Vientiane. With just one trip, a true Indochina comes to you at all senses. The Best South of Vietnam and Cambodia 7 Days 6 Nights

This 7-day package tour will offer you the sightseeing the best highlight of Vietnam and Cambodia. Specifically, you will discover the symbols of the biggest and busiest city of Ho Chi Minh. You also learn more about our Vietnam war by discovering the most complicated tunnels system in Cu Chi to know how we flight the invader. Adidtionally, a quick sightseeing to Mekong delta to enjoy the local atmosphere and know more about heir culture will be a highlight of this package. Coming to Cambodia, it offers you the visiting to Angkor complex, which cannot be missed while travelling to this small country.